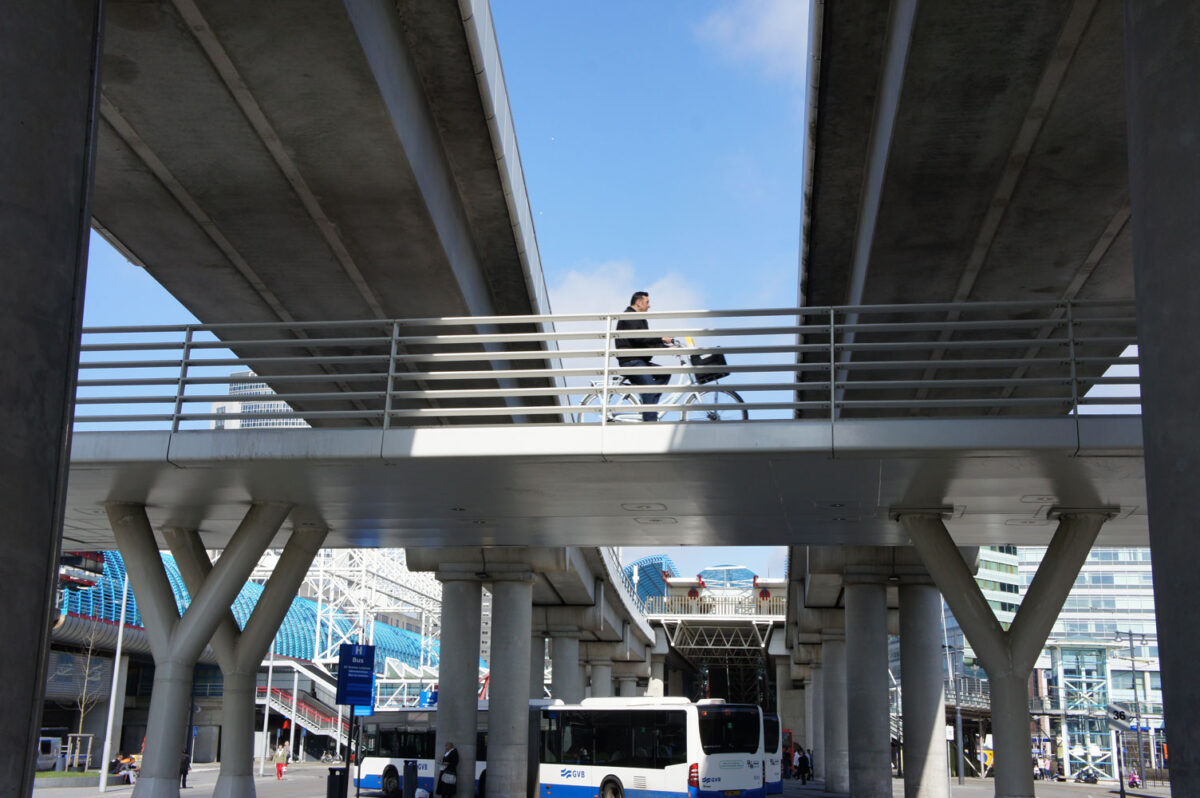 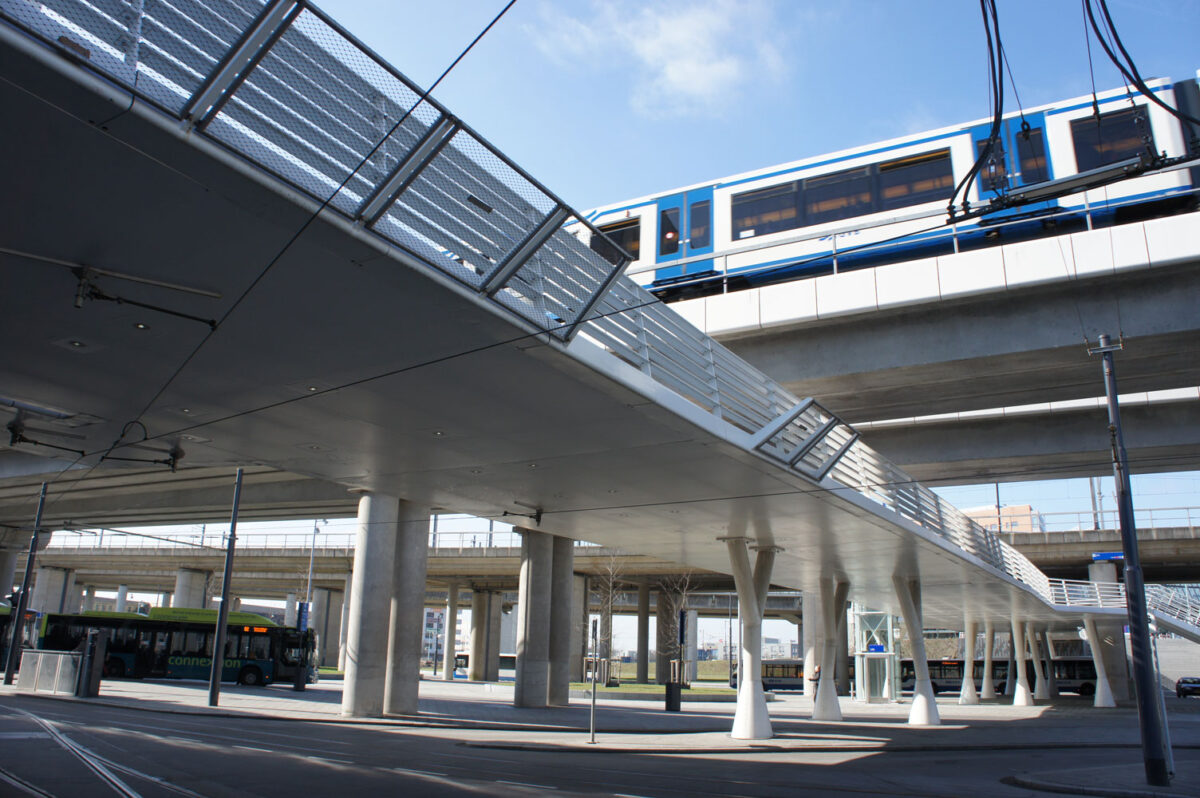 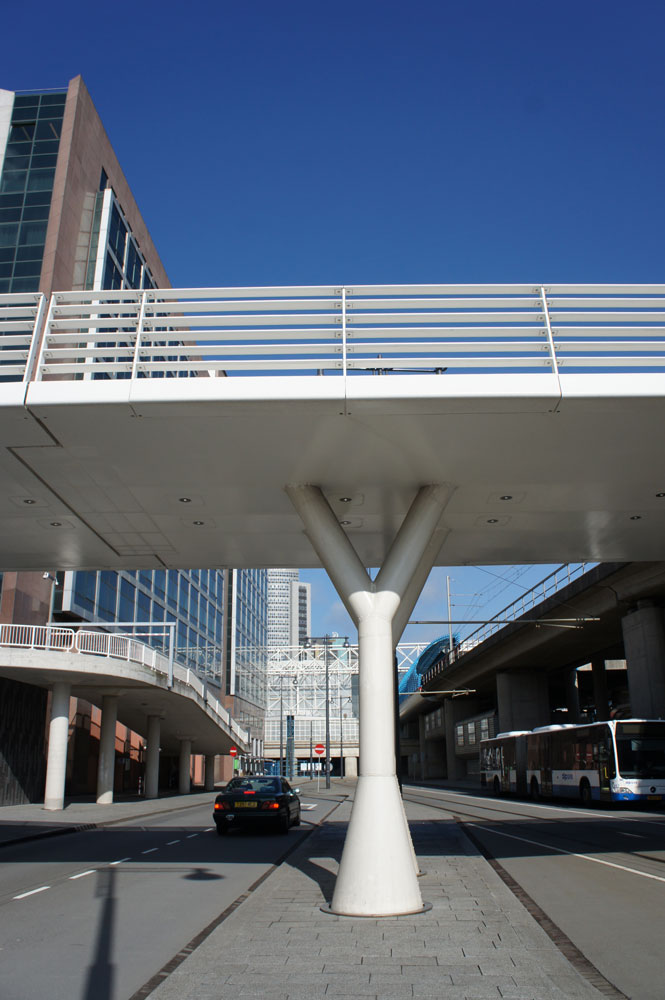 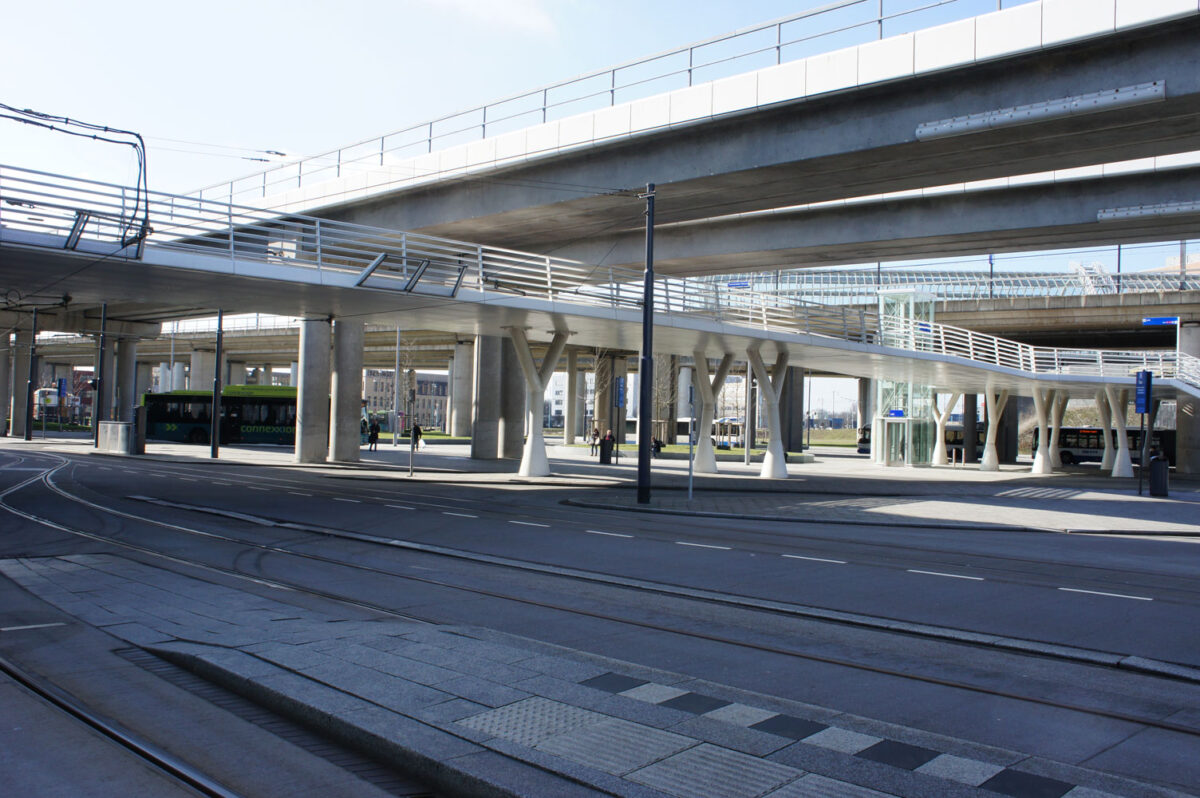 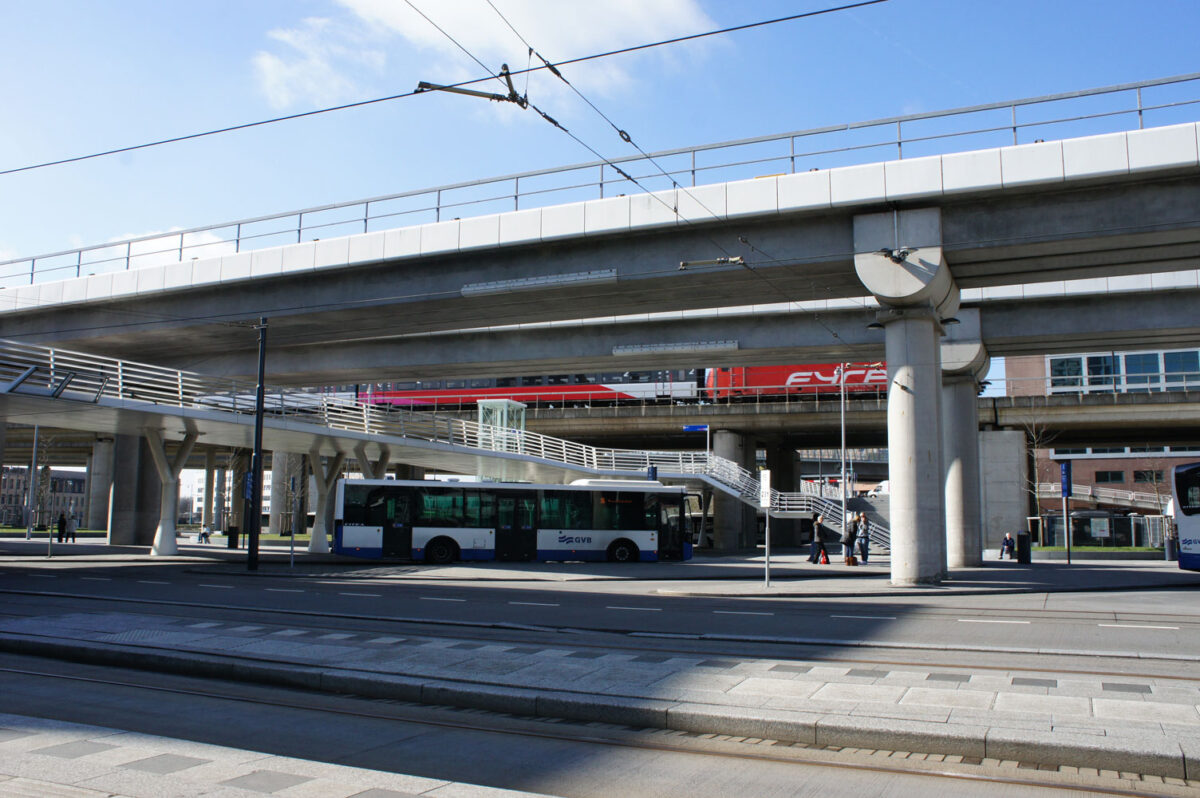 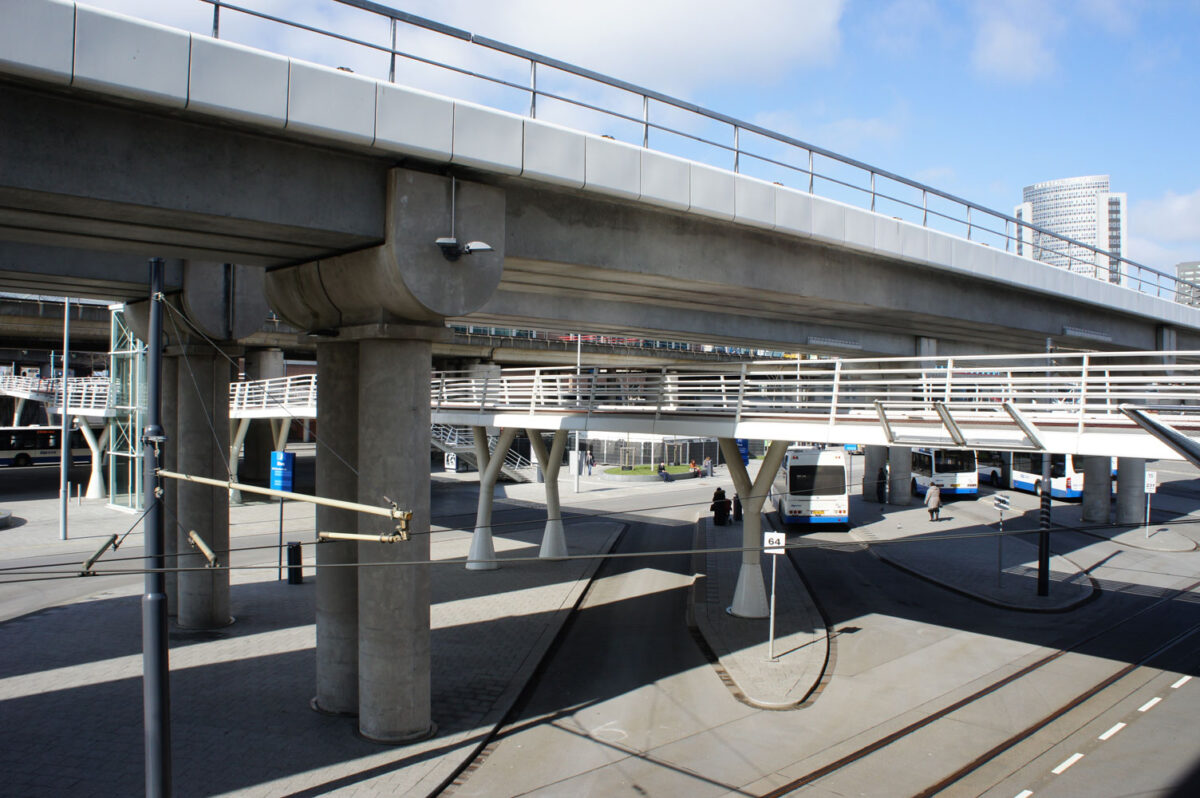 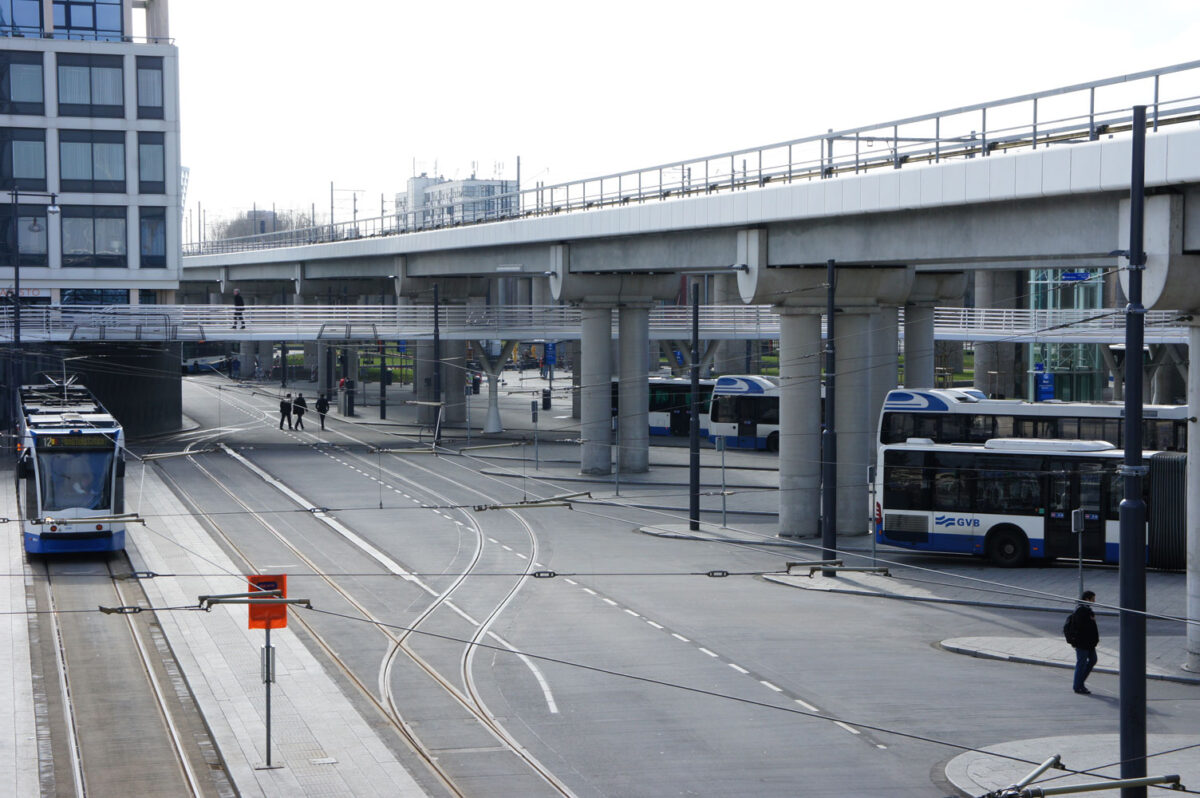 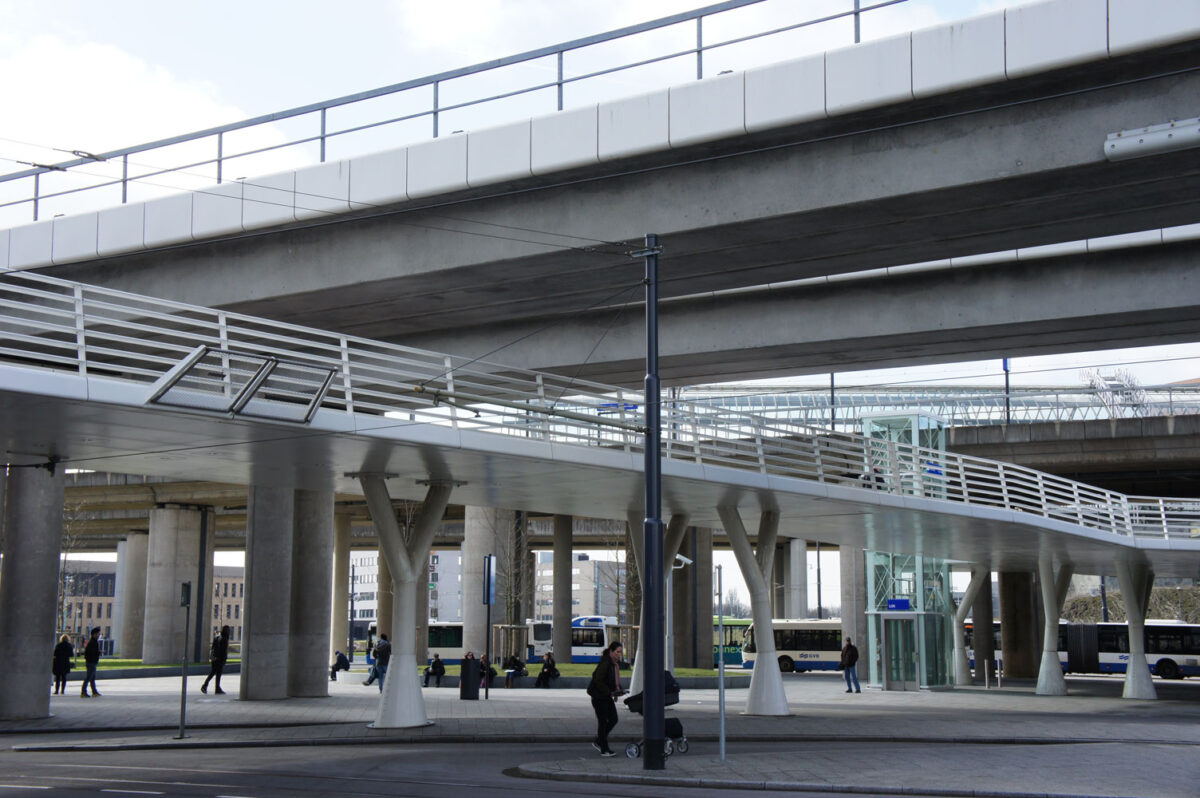 Space around Sloterdijk has been earmarked for new skyscrapers. Traffic has been rerouted to accommodate these developments, and one necessary measure was relocating the buses and trams to the side of the station. In order to provide sufficient clearance for the tram, an existing bridge for motor vehicles had to be replaced by a bicycle bridge. This bridge needed to be incorporated into a complex context with fairly specific parameters. For example, the bridge needed to be just high enough to allow trams to pass underneath without problems, but low enough for cyclists on it to pass under the existing train and metro tracks. The space available was so narrow that we had to design an extremely slim bridge. At the same time, the elevation differences between the bus platform and the bridge needed to be as low as possible, to keep pedestrians from having to climb unnecessarily high flights of stairs. The bridge also needed to have a connection to a future bicycle shed under the railway tracks. Because this planned cycle shed would not be built until a later stage, the bridge needed to anticipate this connection for future cyclists.

There would have been any number of conventional solutions for all these peculiarities of the situation; likewise, another approach might have been to convince the client to adjust some requirements. However, we preferred to zero in on to those requirements to make a more organic connection, a kind of ‘walking’ bridge that varies in height and position, almost as though it is a living organism trying to sneak unseen to the other side. This way, the bridge acts as an organic connector of many different elements: bicycle shed, lift, hotel, bus station, stairs, etc. To be able to meet all these requirements, the bridge deck is designed as a flexible steel construction that adapts to different conditions seemingly effortlessly. It is in some sense a branching structure, with side stairways and a starting point for the exit to the future bicycle storage facility.

The bridge is supported by slim columns with ‘socks’ wrapped around their feet to protect them from the passing buses. The balustrades, lighting and zebra patterns on the deck enhance the organic nature of the bridge, even at night. The slats of the balustrade seem transparent from a distance, but up close act as a skin for the bridge.